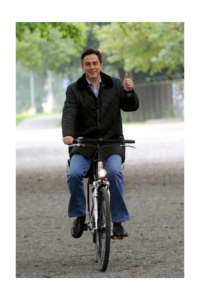 David James McAllister was born in Berlin on 12 January 1971. His father was from Glasgow and, as civilian official for the British Army, was stationed at a number of bases in Germany from 1955 onwards; prior to that, he had served in the 51st (Highland) Division of the British Armed Forces during the Second World War. His mother was a teacher of German and music. David and his two sisters grew up in Berlin-Charlottenburg. He was raised bilingually in German and English, and initially went to a British primary school. In 1982 his family moved to Bad Bederkesa in the Cuxhaven region.

David McAllister received a scholarship from the Konrad-Adenauer-Stiftung to study law at the University of Hannover between 1991 and 1996. In 1996 he passed the first state examination in law. After his training as a junior lawyer, he took the second state exam in 1998 and has been a lawyer ever since.

At the CDU’s regional party conference on 14 June 2008, McAllister was elected regional Chair of the CDU in Lower Saxony, receiving 98.9% of the votes. He held this Office until 26 November 2016.

In 2014 McAllister was the CDU’s lead candidate in the European Parliament election campaign and was elected MEP. In November 2014, he was elected Vice Chair of the International Democratic Union (IDU) in Seoul and has been Vice President of the European People’s Party since October 2015.

In August 2003 he married the lawyer Dunja McAllister, née Kolleck. The couple have two daughters and live in Bad Bederkesa.